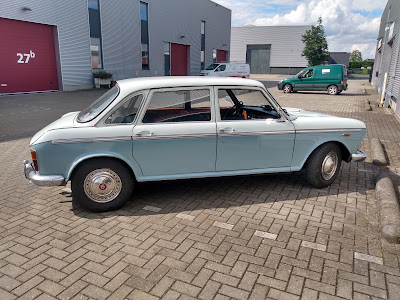 The old Wolseley used to have a so- called " Cable Change" mechanism to connect the gear lever to the gearbox. This worked fine, but at some point we changed the engine and gearbox to a late version. This later version uses a " Rod Change" . 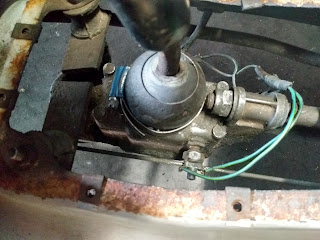 This is the same system used on Mini's, Allegro's and Princesses. The one we use is a shortened version of the Princess system. This system has been working fine too, but after a while gearchange got a little sloppy. There is a small pin that keeps the gear lever in the correct position. I thought to exchange the whole unit as I keep a spare anyway, but I decided to just fix the pin in place with a little ring under the cap. This works well, but I added some extra security with a large hose clamp. The hose clamp has a dimple keeping the pin in place and a hole for the other pin, so the clamp can' t slip off.
Quite nifty I think. Maybe I should have taken some more photo' s..
Email ThisBlogThis!Share to TwitterShare to FacebookShare to Pinterest
Labels: Fixing the cars, Wolseley 18/85s
Newer Post Older Post Home